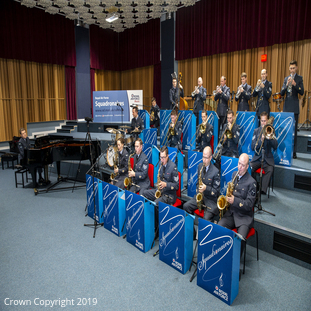 The Band plays by permission of the Defence Council

The origins of the Royal Air Force Squadronaires can be traced back to 1939 when many of London’s professional musicians were recruited into the Central Band of the RAF. Amongst these iconic musicians were trombonist George Chisolm, vocalist Jimmy Miller and clarinettist Harry Lewis who later married the late Forces’ Sweetheart, Dame Vera Lynn – an association the band has been proud to honour to this day. They were the featured Big Band on the 2017 Gold Certified album ‘Vera Lynn 100’, the house band at her 100th birthday tribute concert at the London Palladium, and on the 2020 top 40 album ‘Vera 1917-2020’.

In their early years, the RAF Squadronaires gained a reputation for versatility and flair, soon developing a distinctive style that rivalled many American bands. This reputation continues to this day with one of their proudest moments coming in 2010 when the Band reached the top ten in the UK’s album chart with ‘In the Mood’, and when, in 2018, the Band travelled to Washington D.C. to share the Strathmore Hall stage with their United States Air Force counterparts, the famed Airmen of Note.

The Band are regularly featured on television with appearances at events such as the Royal British Legion’s Festival of Remembrance, most recently collaborating with Sir Tom Jones.

RAF Musicians perform around the world to represent the proud heritage of the RAF whilst demonstrating their musical excellence. Together with supporting local communities and Service charities, Musicians connect with and mentor thousands of children through annual school concert projects and youth outreach workshops. Alongside musical duties, Musicians are regularly deployed on operations in support of troops around the world, and as part of the Government’s response to the Coronavirus crisis, were mobilised to support public services across the UK.