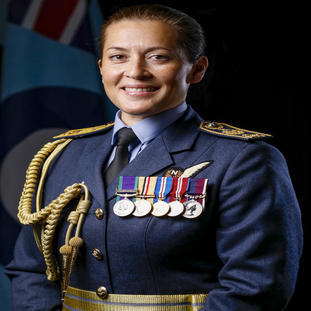 Air Commodore Suraya Marshall ADC MA LLB RAF grew up in York, graduating from the University of Nottingham with a Law

degree and becoming a member of East Midlands University Air Squadron before joining the Royal Air Force as a Navigator in 1994.  During 3 tours flying on the Tornado F3, she participated in numerous operational deployments in Iraq, conducted Quick Reaction Alert in defence of the UK and the Falkland Islands, qualified as a Weapons Instructor and deployed on many overseas, multi-national training exercises.

In operational command and control, she has worked with coalition partners in the Middle East Combined Air Operations Centre, where she was involved in the design and execution for the second Gulf War in 2003 and then in 2019 as the Director of Coalition Air Operations in Iraq, Syria, the Arabian Gulf, Afghanistan, the Gulf of Aden and the Red Sea.

Staff appointments include 3 years working in defence procurement, time in the Typhoon Force Headquarters delivering training transformation and defence sales, and 5 years spent working in the joint strategic environment, initially in the Operations Directorate of the Ministry of Defence (MOD) and latterly as Military Assistant to the Vice Chief of Defence Staff.  A graduate of Advanced Command and Staff Course (2009) and Higher Command and Staff Course (2019), she holds a Masters in Defence Studies.

Suraya is married to Air Vice-Marshal Al Marshall, a former Harrier and Sentinel pilot, who is currently AOC 1 Group. They have 2 young children, Ben and Sophie and in between work and school, the family enjoys spending as much time as possible together, travelling overseas and trying most outdoor activities, especially skiing, hiking, cycling and diving.