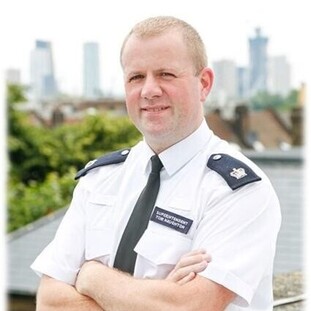 Every death as a result of violent crime is an utter tragedy, leaving lives destroyed and families heartbroken.

The level of violent crime in London is clearly unacceptable.

Tom joined the Police Service in 2000, initially serving in Central London at BTP in both uniform and CID roles. During his service and progression to Superintendent, Tom has served in three forces at BTP, GMP and MPS. During 20 years of service, Tom has held portfolios and leadership responsibilities including specialisms in roads policing, operations, professional standards, criminal justice and offender management.

Tom has an array of experience in collaborating with partners, stakeholders and community leads and held operational, strategy and performance delivery roles. Successes include working collaboratively in leading cultural changes to procedure and training regarding fatality management on the railway network and later devising changes to the approved police practice concerning tactical contact in pursuits. The work significantly impacted on crime reductions in moped enabled crime thereby increasing public confidence.

With experience as a Bronze and Silver Public Order and Events Commander at both regional and national level, he is also trained in critical incident management and spontaneous firearms command. During his service he has also been part of the response to numerous high profile major and critical incidents across the UK in various leadership roles.

More recently, Tom has moved from Lambeth and Southwark Basic Command Unit (Central South BCU) to the Met’s Violent Crime Task Force (VCTF). He is now also the lead on people and wellbeing within Frontline Policing and has MPS wide portfolio responsibility for offender management.

Whilst originally from Bolton in the North West, Tom lives in Bromley with his wife and 2 children. He is a keen jogger and recently retired amateur football