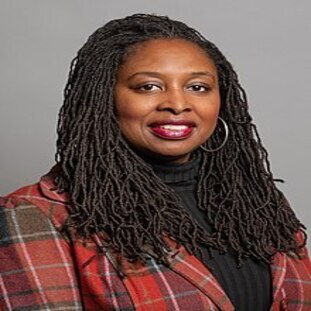 As one of six children, Dawn was born and raised in East London to expats from Jamaica. At a young age she worked on a

market stall as well as helping out at her family owned bakery before starting her adult career as a computer programmer/systems analyst.

Dawn’s desire to enter politics came from a deep-rooted commitment to address inequality and strong values imparted from her parents. She soon went on to work as an equality and race officer at the GMB union and an adviser to the Mayor of London.

Elected as the Member of Parliament for Brent South on 5 May 2005 Dawn’s maiden speech described her constituency as a “shining example of integration at its best”. Dawn later became the first elected African-Caribbean woman to become a Government Minister in the UK.

Dawn has always been a passionate campaigner for young people; she is an Honorary Vice President of the British Youth Council, was chair of the All Party Parliamentary Group on Youth Affairs and was made a member of the Children, Schools and Families select committee and Vice Chair of the Labour Party with responsibility for Youth. In 2008 she became an Assistant Whip in the Commons before her work on youth led her to being appointed as the Minister for Young Citizens & Youth Engagement at the Cabinet Office by Gordon Brown.

A natural campaigner, since returning to Parliament Dawn has taken on the ‘Big 6’ energy companies over the excessive cost of pre-payment meters. She has held a Westminster Hall debate, launched a national petition and secured a commitment from the Prime Minister to look at this issue.

Dawn served as Labour’s Shadow Minister for Women and Equalities between 2017-2020 and continues to be strong voice in Parliament.