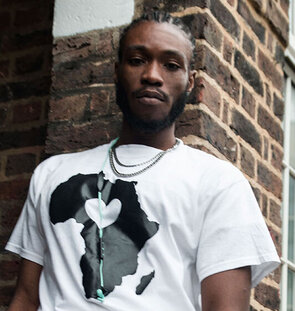 As the world changes some of us will change with it and some of us don’t, some will stay the same and while some will evolve.

Born and raised in Nigeria, Boy Sasyo then moved to Peckham the U.K.

From a young age His love for playing football got him noticed by various football scouts and landed him a place at West Ham football academy.  A bad injury abruptly stopped that from continuing and a spell of bad company allowed him to get into trouble, which landed him homeless twice. These turn of events lead to a meeting at a hostel with an up and coming rap drill artist called Max who forged a good friendship and music partnership that created his first music venture The Smokey Boys.

After a few years and a few released videos the 2 parted company and Boy Sayso became solo, released his debut EP ‘African London’.  A mix of tribal beats, UK rap and Jazz fusion sounds cemented by songs of life living London with African roots and is now working on his 2nd EP ‘Sayso’s Memories’ A mix of jazz instruments, UK jazz rap and jazz fusion sound, cemented by telling stories about dealing with Homelessness, Mental Well-being and the world we see today.

Another turn of events led him to play a small part in The first film Blacks can’t swim, plays one of the leading roles in the 2nd edition Blacks Can’t Swim the Sequel’ and now schedule to play as a leading character (Role Model) in the 3rd film.

Boy Sayso has been interviewed by the Guardian news paper, BBC 1xtra, Performed at the 2021 Windrush Festival, appearing with his music for an advert for the Royal National Lifeboat Institution. Boy Sayso is using his music to elevate himself, communities around him and also telling his story about where his coming from.