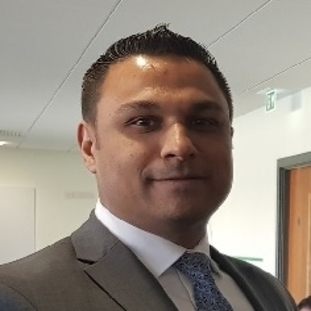 Andy George joined the Royal Ulster Constabulary GC (now Police Service of Northern Ireland) in 1999 and spent his first 8 years in a response team before moving to the Armed Response Unit for 10 years. He recently was successful on fast track Constable to Inspector and have been completing various rotations in force, the last being a Detective Inspector in CID.

He attended his first NBPA meeting in July 2016 and was elected onto the Cabinet as Sponsorship Co-Coordinator in October 2017. He was then elected as Male Vice President in October 2019 and now as President of the National Black Police Association which represents all black/ethnic minority police associations in the UK.  He is currently an Inspector in the Police Service of Northern Ireland, attached to the Equality, Diversity and Inclusion Unit in HR and also the Interim President.

Andy was born and raised in County Armagh, his father was born in Malaysia and his mother is from Northern Ireland.  As a mixed race, he grew up in an almost exclusively white environment and as the eldest in his family, he had no one to look out for him which at times made him feel a little isolated and most certainly a lot different.

During his school years Andy had people waiting to assault him when the bell went and was subject to a number of racist comments and songs whilst growing up.  It was strange at times as this abuse was easier to take than some of the lower level comments that friends and family would make like: “where are you from?”, closely followed by “where are you really from?”  This made him feel that he was not accepted as a citizen of the country he was born in just because the pigment in his skin was darker than most people.

When Andy joined the police in 1999, he was first posted to Omagh and then joined the Armed Response Unit which he absolutely loved.  He left Armed Response in 2017 and has been rotating through fast track promotion processes. The job can at times be stressful and not always fair but Andy found it to be such a rewarding experience being able to help others and stop people causing harm in communities.

Within the Service Andy has on occasions faced direct racist abuse from some colleagues (which he robustly challenged) and also received great support from other colleagues.  He has also on occasion found that he has been subject to more indirect racism when he felt he was passed over for temporary promotion because of his ethnicity. Conscious and unconscious bias with respect to all minority groupings has to be challenged by all organisations. Within the Police Service of Northern Ireland and within police forces across Great Britain, Andy is working with senior police leaders to change and put in place policies and procedures to bring about meaningful change and to eliminate these biases so that we can have a truly diverse and inclusive workforce.

Andy is now providing help to others through my National Black Police Association role and hopes that eventually we will have a culture within policing that truly values the unique skills and experience we all bring and must be allowed to be ourselves in work, and policing must acknowledge the lived experiences of officers and staff that can give an insight into how sections of the community feel.

Andy believes inclusion means valuing our people and if we utilise the cultural competence our workforce contains, we can truly listen, care and act in the best interests of all officers, staff and the wider community.